Do you remember the story about just grabbing a purple hat?

It’s January. And I’ve been thinking about purple hats.

I’ll bet you’ve seen this, but will post it here for clarity’s sake:

Naturally, she needed a purple hat. 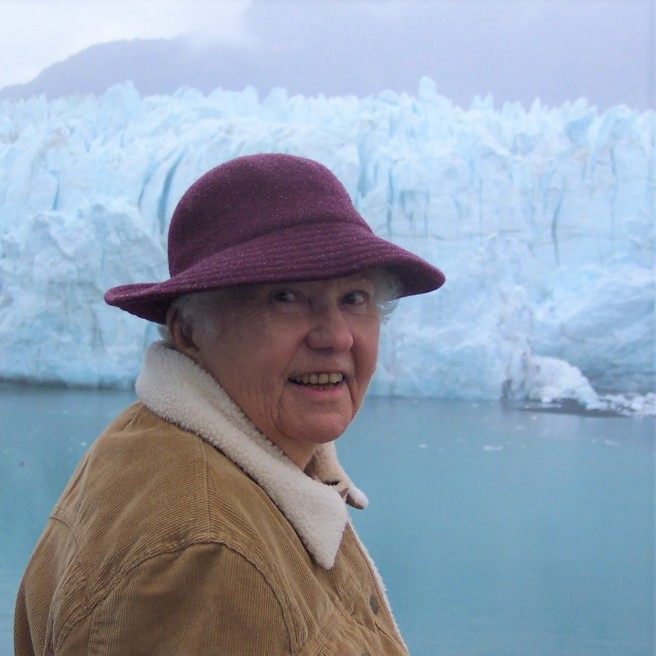 Here is my amazing grandmother on an Alaskan Cruise in her purple hat.

I loved seeing her in her purple hat. And she was a good example of grabbing her hat and enjoying her life.

January has always been a hard month for me. It’s cold. It’s dark. And someone got the idea that we should all scrutinize our lives and see what’s wrong and set monumental goals to change it all. By February. Or at least by December.

I’m not going to lie, there is a part of me (the organized, structured part) that loves the idea of setting goals. I may have even sat down earlier this month and come up with some things that I’d like to accomplish this year. But these are gentle, reasonable, deliberate goals that (most of the time) do not cause anguish and despair. But it’s taken me years to learn how to do that.

So, back to January.

If I had my way, I’d climb under my magical down comforter on New Year’s Day and not come out ’till mid-March. And we would all be better for it. Really, I’d like to be the kind of animal that hibernates. Like a furry mama bear, I would see and feel that it was cold and dark and know that was my cue to sleep until it was warm and light again.

Alas, I am not a bear. But I am a human who goes into a sort of hibernation mode during January. I slow down. I cuddle up. I like being in my cave.

And here’s where I get back to the purple hat.

I’ve been wearing yoga pants pretty much every day since January 1st. With thermals underneath. I only curl my hair on Sundays. I have a deliciously cozy hoodie sweatshirt that I wear at least twice a week. And. I. Don’t. Care.

Admittedly, I’ve only reached the “40s” part of the poem. And yes, I do look at myself and see “clean” and go out. But I think I need a purple hat too.

Because those voices of January Goals are reminding me that my 40+ body doesn’t process all that mint chocolate I ate during the holidays as quickly as it used to. And those voices are calling out ideas for hair styles and make up and clothing and exercise routines and home decorating and…

Now, I don’t have anything against any of those things. But my qualifier is, “Am I doing it for me, because it brings me joy?”

There are times when I do curl my hair. Because I want to. (And it hasn’t been raining for two weeks straight.) And if I decide to wear red lipstick or pink polka-dot rain boots, I’ll do it because I want to, not because I feel some sort of societal pressure to have vixen lips or $100 boots.

In January, my mental health is best when I wear the coziest clothes and don’t bother with my hair. So, I shall grab my purple hat and do just that.

And when March rolls around and springtime starts waking the world up again, I may choose the red lipstick and pink boots. With the purple hat.

At the end of this somewhat long and particularly rambling post, what I really want to say is: I’m grabbing the purple hat! I won’t bother with those annoying voices that poke at me and try to convince me that I am not enough of something. I will be exactly who I feel like being today.

And I’m grabbing a purple hat.

2 thoughts on “A Purple Hat”